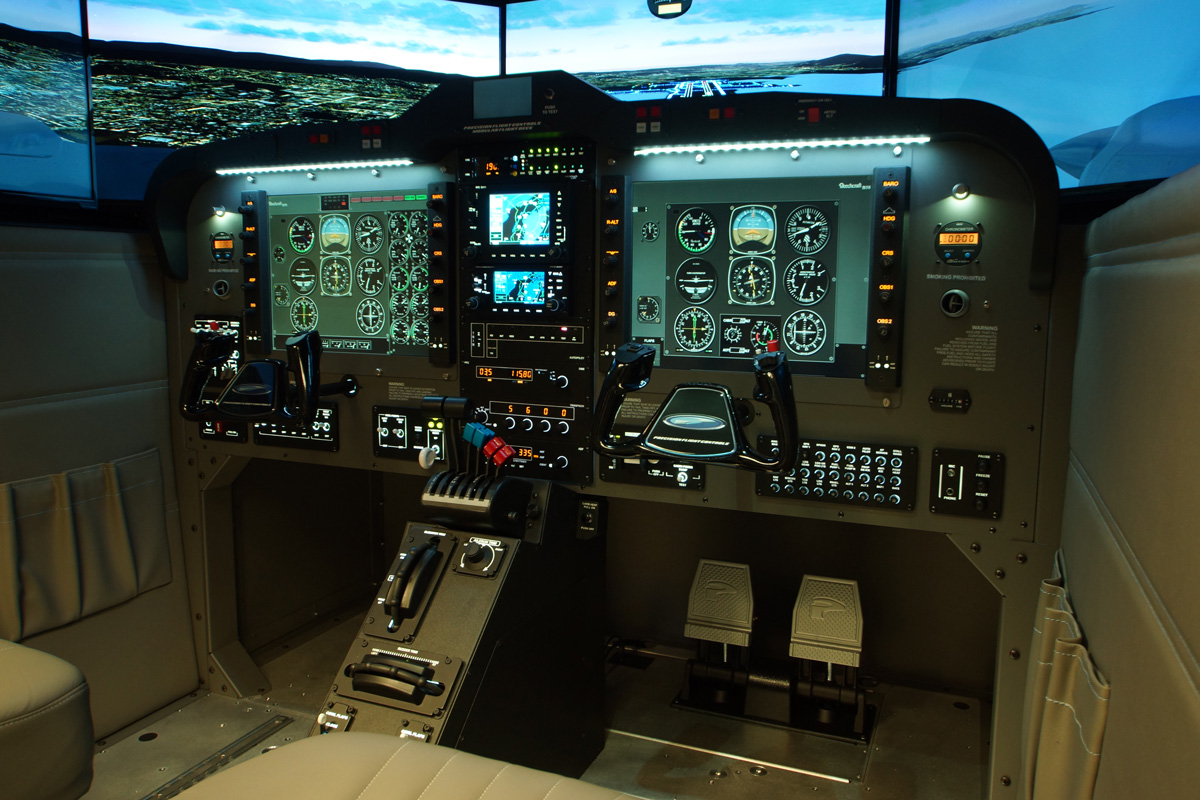 I started teaching in 1975 and it was not only teaching private pilots working on single engine aircraft but pilots who worked for our 135 operation in large multi engine aircraft and turboprops. With the ups and downs of the aircraft industry I had pilots that I taught that went on to fly large commercial aircraft and who flew for the airlines. I have always been a proponent of simulators and believe that the most “real life” situation you can give a training pilot the more adapt he or she is going to come to flying in real life.

There are many sim manufacturers. You can spend up to two million dollars and not get any farther down the road then spending $450,000.00 for a motion sim. We worked with Precision Flight Controls to build our full motion sim. It was the first large MFD they built to our specifications. We wanted to get something that put “real life” into the training. I remember when we first saw a mockup of one of the full motion sims made by PFC my wife even got excited and she knows nothing about aircraft nor does she want to.

MOTION MAKES A DIFFERENCE, especially when you are closed in a cockpit, at night, in the dark, with rain and low approaches. I have watched students “sweat” (yes it is equipped with an air conditioner) and when the simulated task is over we get, “wow, that was draining, I need to rest a while,” (I always can see this and say “lets take a break”).

The idea is to work with the pilot and get his levels up as high as possible and then “throw him to the wolves” with different problems in the sim. If he had problems, you work out the problem(s), but the more he is mentally feeling like the real thing the more he steps up his level of training to think out the problems.

Yes, motion sims are worth the money. We have two and believe me you get involved in the feeling they generate. You close that door and you are in another world. Your mind goes into real life mode and it gives you and the instructor of actually being in the flight situation you are exposed to.

I had a Southwest pilot who owns a twin Cessna, go through our final program while in the full motion sim by himself. He had to miss approach at a lower than normal DH on the ILS and then deviate to the alternate. He lost an engine, flaps and a brake. He found out as he broke out that he lost the gear and pulled the emergency gear which is a switch and he pulled it out of the housing. He then lost the airplane. The bottom line, our sim, which is full motion, put him in “PUCKER FACTOR.” That is what we train to prevent.

Those who say a “sim is a sim” have not flown in our full motion sim. Realism in training is what it is all about and that is why we spent the funds we did to build our complex system.