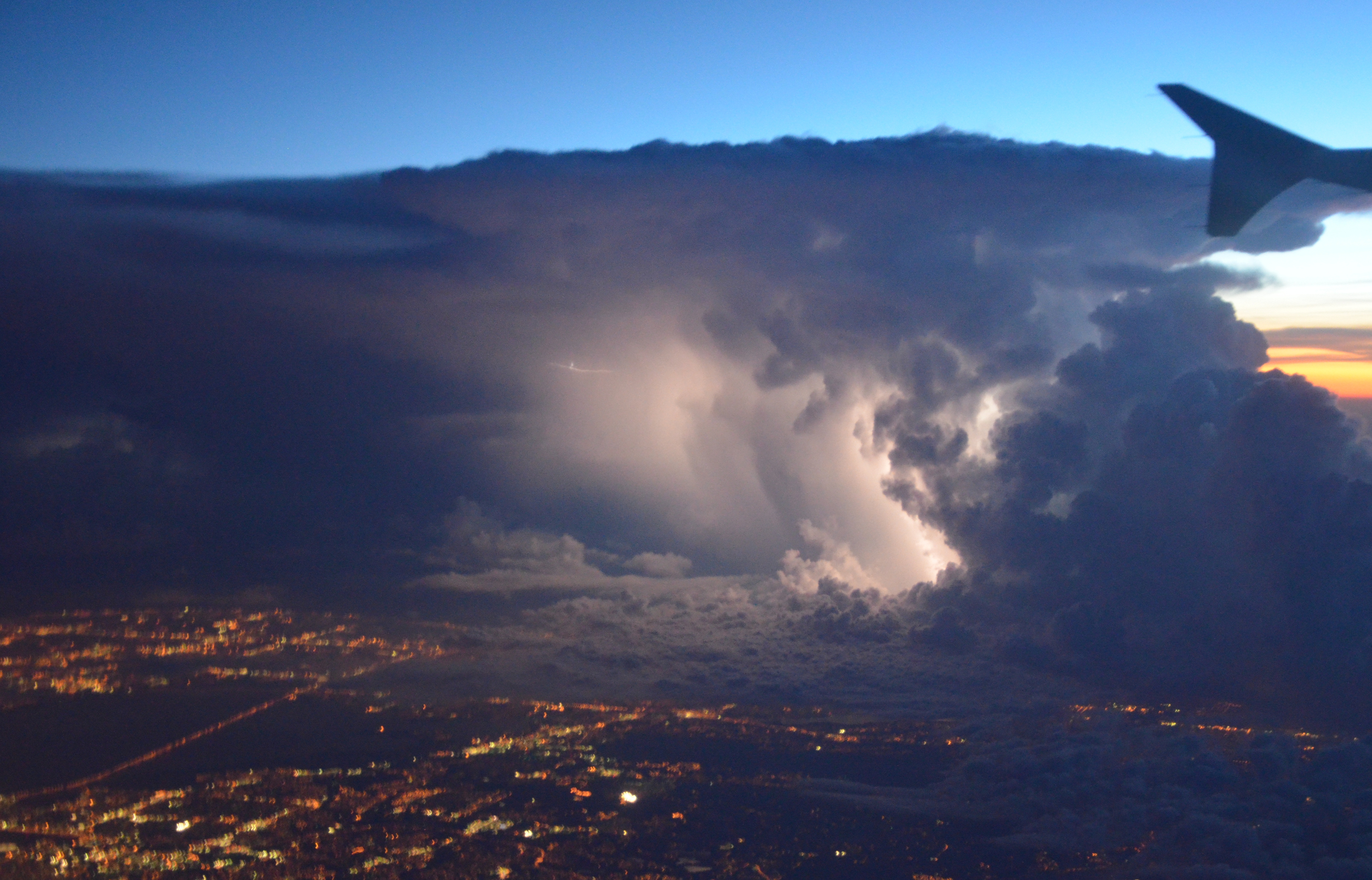 I have not heard a lot about wind shear in the recent years.  I have an Aircraft Dispatcher license and of the license and ratings that I have this one is very important to me.  To qualify for the license, not only did I have to be extremely familiar with turbojet aircraft, but I had to also understand weather in detail.  The recent Atlas Air crash came back to make me take a look at wind shear and micro burst.  Again, I am not sure what caused the Boeing 767 to go down but they were headed for a line of thunderstorms and were deviating. Slow and heavy made me think about my dealings with this type of weather.

I will never forget the National Airline examiner in Miami who qualified me.  It was in the early 1980’s and one of the many things he showed me in regard to “do you know what is happening here” was a Radar Summary Chart.  It was of the Gulf Coast area.   The front was located just west of Houston and was your typical January to April or late summer front with push from the northwest and pulling up moisture off the Gulf.  Again, he asked me what was going on.  “Throw me into the briar patch as I was raised by flying in this area.”

After this “what was happening,” I recited a four-minute dissertation of the weather that was occurring concentrating on the front and of the movement that make “squall lines” type weather. These produce strong winds not only in a downdraft but side to side and direction reversal changes known as “wind shear.”

Airplane Crashes due to Wind Shear

Wind shear and micro burst came into play in the early 70’s. It has always been there but after a couple of aircraft losses it made the “papers.” Wind shear is a quick reversal of the wind from one direction to the reverse direction.  In other words it was in front of you and in a millisecond, it is behind you. Micro burst is a downward push low to the ground of a downward pressure from a squall line and/or thunderstorm.  One of the first to be really recognized was Pan Am flight 759 out of New Orleans.  The weather predicted for New Orleans prior to takeoff was “contained thunderstorms, possible severe turbulence, icing, and wind shear.”  The thing you need to remember about weather; even today, is that you cannot read the problem as being very close to the aircraft with the instruments and equipment we have.  Nexrad is several minutes behind and even the radar on the aircraft is not perfect.  Wind shear can extend out miles from the line causing the problem. You may think wind shear is a long way from you but 20 to 30 miles could put you into wind shear.

The second major crash was Delta 191 into DFW in 1985.  Again a microburst under a cell and possible wind shear.  The heavier and slower the aircraft is, plus the fact that it is a jet engine powered aircraft, helps put the problem into a precarious situation.

In the 80’s when I was flying for a living, I got into a wind shear situation going into Corpus Christi.  I was in a large prop plane with a copilot and passenger and was being vectored for the ILS.  The weather was a low cloud system that we were below and dark clouds related to frontal movement northwest to southeast.  The weather was a typical low with stable winds not a “bouncy” situation.  All of a sudden, the air seemed to just go rapidly still and it was like we were hanging in midair with no wind or volume of air around us.  I immediately push the power up to takeoff power and the plane caught up to the stillness surrounding us.  I reported wind shear and the tower agreed even though this airport probably did not have a wind shear alert.

In a propeller plane such as a Twin Cessna if you hit wind shear you will know it as it feels like the air is gone from surrounding the plane.  You may get an airspeed indicator that shows a slower airspeed.  You may hear the engines come up in power as you have lost air resistance to the props pulling your through the air.  In a prop plane get the power up, hold level flight and you will be back in stable control almost immediately.  In a microburst pretty well the same things apply.  You will get a downdraft with a vertical speed going down.  Bring the power up, raise the nose slightly and fly it out just outside of a stall.  If you are not cleaned up such as on a takeoff get the aircraft cleaned up and get the nose up just enough to continue to build airspeed.

Weather is unusual to different geographic areas.  Years of flying out to California and back and flying in the California area lead to a totally different type of weather.  Flying on the east coast and the Bahamas is different.  The upper east coast and north to Michigan lead to a totally different type of weather conditions.  The bottom line is that weather is a learning experience.  You cannot learn it in a book.  You have to learn it by flying it and making sure you are in an aircraft that can handle that particular weather condition.